Check the Weather...and the Doomsday Clock

The idea for my latest novel, FINAL SOLSTICE, had a very simple origin. During the past decade or more, it's been all but impossible to escape the tirade of doom and gloom warnings from scientists, non-scientists, professors and politicians, and everyone who's ever lived through a hurricane or tornado. Climate Change. It's here, it's getting worse, it's all our fault (or not, but there's still maybe something we can do about it). It's a tremendously complicated subject, as much as many want it to be cut and dry. The earth (and its surroundings) has an incredible system of interrelated elements governing its climate--from geothermic forces to ocean tides to methane release and solar wind and magnetic atmospheric activity. But what if...?  (I wondered) What if this all could be manipulated?

In my research, there have been plenty of attempts to control the weather, all with varying degrees of limited to zero success. Apart from more controversial and wilder speculations that there are secret facilities than can harness microwave energy to cause drastic weather or geological activity, what if there existed a secret group of people with ties going way back to the early days of civilization, a group of wizard-scientists who could actually control the forces of nature? We've all heard of the Druids. Of the rumors about how Stonehenge was built, of human sacrifices and magical ceremonies, of amazing cures and incredible natural power.  So my next logical thought was to apply that What-If question to today's climate conditions. Things are getting worse, or so it seems. Polar Vortex, massive hurricanes, earthquakes and tsunamis. What if all this environmental mayhem is not just the result of our gradually expanding carbon footprint? Maybe there's another agenda, another force at work.

Enter my idea for Final Solstice, and right away I had the perfect hero and villain, and a cool high level concept. Think Grisham's 'The Firm', but with global and apocalyptic stakes. An everyman meteorologist and family man, but one with a history of weather-related tragedy, is recruited by a mysterious environmental firm with a charasmatic CEO who claims he can predict major weather conditions--and provide a humanitarian solution to saving lives. Only once our hero is in the thick of things, he finds out there is of course a far more sinister purpose to the firm's long term objectives...

So that's the basis for FINAL SOLSTICE, which was tremendous fun to write, to research and to now have published by Wordfire Press. I'm also thrilled to have it included in a great collection of 11 novels all dealing with disasters and survival.  Check it out at Storybundle and pay your own price! Don't miss out on this deal that lasts only 3 weeks! 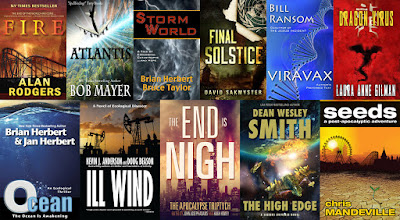 Posted by David Sakmyster at 9:20 AM No comments:

Writing: A Not So Solitary Existence

The old adage that writers lead a solitary life and are, by nature, these hermetic creatures living under rocks or out in some cabin in the wilderness, is quite attractive but ultimately I’ve found, it’s mythical and more or less false.

While not the most outgoing person (no one would accuse me of being too loquacious), I’ve found that a large part of what we do as writers involves socializing, meeting others and actually getting out there and learning from others. This eye-opening fact that shattered my once fondly-held illusion of just being able to hide away from the world and churn out bestsellers in anonymity; however, this actually turned out to be one of the more exciting aspects of being a published (or even an aspiring) writer.

From the first local writing group I joined, headed by best-selling SF novelist Nancy Kress, where I got to meet and exchange critiques with a dozen or so other writers in various stages of their careers, to the fantastic experience of being invited to a week-long writing retreat courtesy of being one of the winners of L. Ron Hubbard’s Writers of the Future Contest in 2005, this aspect of being able to experience directly from other writers has been an amazing blessing. The initial trepidation of meeting such legends as Larry Niven, Jerry Pournelle, Robert Sawyer, Anne McCaffery, Tim Powers and Kevin J. Anderson (among many others) gave way after a few days to the realization that not only were these amazing writers just ordinary people who have written extraordinary books and created amazing worlds and memorable characters, but they had so much to share—and were more than willing to pay their success forward.

Not only did I learn about the craft from them, but I gained contacts, mentors, advice-givers and even future publishers. (My Escape Plans was published by Kevin J. Anderson’s Wordfire Press).  Armed with multiple publications and more than a dash of confidence, I now attend writing conferences and genre cons with an eye to meet and make more contacts and to keep on learning and improving my craft. I’ve shared drinks at a bar alone with Peter Straub and talked Shadowland (my favorite horror novel); I’ve explored historical mysteries with Steve Berry and James Rollins and discussed Nazis and novel-to-film adaptations with F. Paul Wilson, author of one of my favorite novels, The Keep.  And all this social interaction isn’t just limited to the real world. I belong to several internet writing groups on Goodreads and Facebook, and the writers there are all spectacular, fun and helpful—and much more reachable, sometimes 24-7, and you have to log out once in a while or it can get overwhelming. All that social interaction only fuels inspiration and the intensity to go on writing and creating. I’ve even made contacts like Steven Savile and Rick Chesler, whom I’ve gone on to collaborate with and create amazing books together.

And now I find myself standing shoulder to shoulder with a great group of writers in a pay-what-you-like bundle (the Writers of the Future Bundle), with Escape Plans nestled in there alongside works from Kevin J.Anderson, L. Ron Hubbard, Jay Lake and Ken Scholes, David Farland, Brad Torgersen and Brian Herbert. Just to be mentioned along with their names is a thrill, and to know that fans of theirs might then keep reading and get to my contribution is its own special thrill. Escape Plans is a collection of my favorite short works, including some prequel stories to my most successful novels in the Morpheus Initiative, and I’m so excited to have all those memories in one slick package.
So that being said, it’s also nice to take a break from all that interaction once in a while and try to recapture the solitude, as in having time alone to write, reflect, and yes—read. Try it, and read a book (or eight) today! 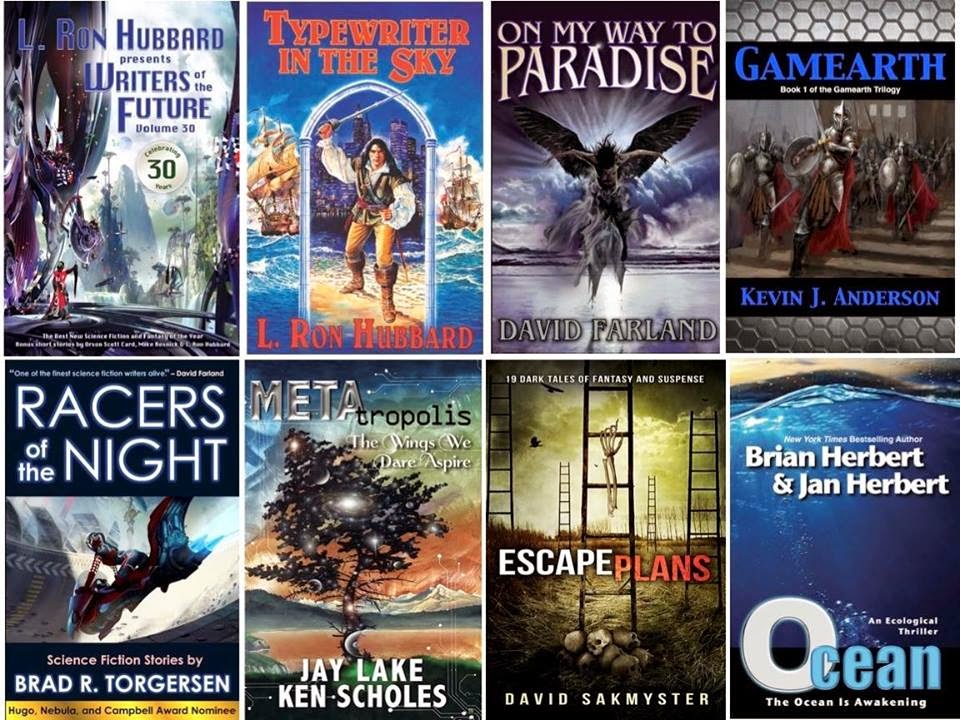